Employed by COAC as a Summer Activity Camp counselor and was on duty at the time of the drowning.

Nearly four years after Yoni's death, on the first day of trial, March 24, 2009, she admitted (through her attorney) that she was negligent and the cause of Yoni Gottesman's death. 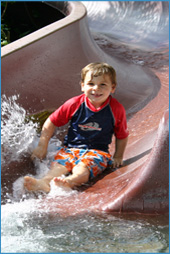 Jeanette (Jennie) Darling was negligent and the cause of Yoni
Gottesman's death.

Q.   All right.  And was Mr. Berti indicating that
you were at fault?

A.   I think that it was everybody's fault that was
there.  We were all responsible.

Q.   Okay.  "I felt like Mr. Berti was trying to
blame me, and kept trying to get me to tell him" what
Sam -- "that Sam Shipley, or I, was responsible.  I felt
he was trying to avoid taking any kind of
responsibility" for all -- for what happened -- "at all
for what happened."
Is that your testimony, ma'am?

A.   When -- when I say "all," I -- I meant that as
individually.  We didn't all sit down together and watch
the video together.  We watched it individually in the
room with Richard and Charlotte, and I don't remember
everyone who was in there.

Q.   Okay.  And there was another time that you met
with Mr. Berti?

Q.   And at the second time, did you see the film
again?

Q.   And that was just you and he, and anybody else?

Q.   Okay.  And even at that meeting, he was
suggesting that it was your fault?

Q.   And you say in the top of page five, line one,
"I felt like he was trying to avoid taking any kind of
responsibility at all for what happened."
Are you talking about Mr. Berti there; is that
correct?

Q.   Did Esther Clark ever tell any of the camp
counselors about the camp pool rules?

Q.   "They were always wearing sunglasses, so it was
hard to tell where they were looking, but I always felt
like I was being a lot more attentive than they were."
And what -- is that a true statement?

A.   I don't know if they were the lifeguards there
all summer.

Q.   Those are the lifeguards there that day?

Q.   Could you see that little circle, that little
body (unintelligible) from where you were seated?

Q.   Okay.  Do you think he should have seen the
child by now?

Q.   Do you think they failed in their duty?

Q.   BY MR. CAPPELLO:  Does that lifeguard look like
he's paying attention to the pool, ma'am?

Q.   You say in 31, "There was no coordination
between the counselors and the lifeguards."
Is that accurate?

Q.   "We never talked about who was supposed to be
doing what, or who was responsible for what areas or
which children."
That's accurate, isn't it?

Q.   And that's not the way to run a pool and the
safety for children, is it?

Q.   And this is something you clearly should have
said something about, shouldn't you?

Q.   You say, "I believe that the Cathedral Oaks
Athletic Club placed financial concerns over safety of
its employees and guests."
Do you believe that?

What COAC did after killing Yoni?